First is just that. HAPPY NEW YEAR. May 2016 be the best year full of love, health, and dreams coming true.

I have high hopes for my writing this year. Several projects are planned and more keep popping in my head. Not only will you see your favorites return, like Brian and Greyson and Zander, Christian, and Billy, but you will also have the privilege of meeting my two very first men I ever wrote.

They are dear to me and have always had a place in my heart. Their story was complete, but because it was based as a fanfiction first, I am rewriting to make it more original and taking out everything soapy 😉

Sticking with the premises of their personality I really feel that the story is original and fresh. I’m even more in love with these two men.  I think all of you will be as well.

I am happy to announce that pending approval and “life events” that Struggle will be released on February 29, 2016. That’s right, I wanted a leap day release.

No reason except I like different. 🙂 and honestly this story has been a leap for me. It’s different than a cookie cutter romance. It has been since the very beginning.

I wanted to explain something to my loyal friends. I started rewriting Struggle over a year ago, so the majority of this book was already done. So if you’re wondering why it’s being released before Dark Regret, this is why. I should have released this months ago, but because of some Facebook drama I put it off.

I think the majority of you know that this story is going to touch on the topic of domestic abuse in the LGBT community. I want to do it justice, and I friended a man who showed me a lot. He had no idea I was writing this book before anyone. As I got to know this man, I found out not only that he was the most amazing person, but he was also physically, sexually, and emotionally abused by his “husband” for years. 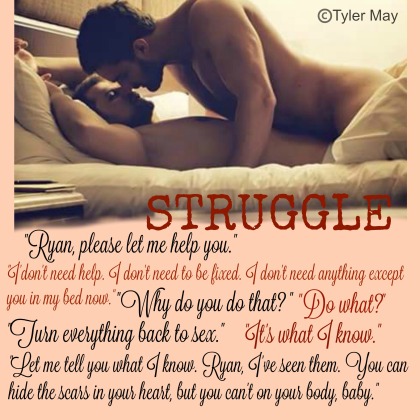 After being accused of mocking his story, not by him, or “writing” his story. I stopped. Why I let these people pressure me to stop or scare me away was stupid. I shouldn’t have, but I wanted to be fair. So I put Struggle off. If wasn’t until the last couple weeks when I went back and revisited the cover and product I have that I KNEW it was time to tell this story.

I even discussed it with my friend and he agreed. He won’t read my story, which I completely get as it is too hard for him. And I would warn others that are in the same situation to take the warnings and triggers seriously.

But hearing my friend’s story and knowing this is a problem often overlooked in the gay world, I knew I had to finish it.  This is by NO means anyone’s story but Ryan’s(the MC in my story). I asked no one for their input or “story”, I would argue you that question this to read and judge for yourself.

I’m not hiding them anymore! I’m proud of the story and if any of this story sounds familiar, I would argue that maybe it’s because of stereotypical actions taken by the men that abuse their husband/boyfriend.

I have reasons for mentioning this as there are people waiting with baited breath to see if this is “his” story. NOPE. NEVER. I was trusted with “his” and that is where it will stay. This is MY story, MY men, MY mind, and My chance to bring awareness to this subject.

I was lucky to meet my friend who has taught me so much. He taught me to be strong.  He taught me what friendship is, and more importantly he taught me that these men do overcome. They survive. I’m proud of him and because of him, I know that a happily-ever-after is achievable in these stories.

So this why Struggle was a struggle for me…… But I’m going to prove once and for all, this story needs to be told whether it comes at people’s gossip or not. I’m ready to hear what people say, good or bad. Because honestly, it’s NOTHING to go through compared to what these people do. I’m ready, strong, and hoping you all enjoy this story.

Be strong…..My friend also told me that.

Can you believe that? How sad, he was telling me to be strong over a fictional book. That’s what a great guy this man is, and because of this, and I don’t care what anyone has to say about it, I will dedicate the book to him and the other men that have suffered this abuse. He doesn’t even know this, I’m voicing it for the very first time today. Sadly, I struggled with doing this as it would cause more drama, but again, I say screw it.

It’s not going to stop them from thinking it, why not do what I know is right. Read the book…. compare…. It will prove you wrong.

This will hopefully be the last time I have to bring this up. I will not argue or fight. My hopes in this story is to bring peace to the minds of those wondering and hope to the men living it. Talk about pressure.

So come what may….. Struggle is coming your way hopefully at the end of February.

Love to all of you. Your support has been incredible. I am so thankful everyday for the friends I’ve made. Thank you….. Thank you…..